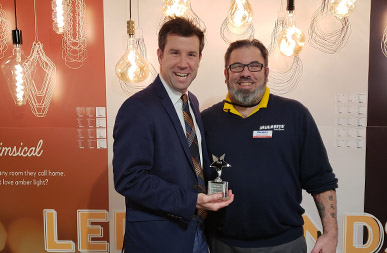 “It’s our pleasure to recognize our sales representatives who practice and reflect the same passion, values and innovation that we do,” said Brian Creeley, Director of Sales, Bulbrite Industries. “Bulbrite congratulates the 2018 award winners and looks forward to an outstanding 2019!”

2018 Best New Agency – BC Lighting Group
In 2018 Bulbrite joined forces in The Carolinas with BC Lighting Group. This dynamic team of Brittain Cherry, Kevin Blackley and Martin Blackley hit the ground running and never looked back. They took their territory of North and South Carolina to new heights and fostered several key partnerships along the way.

2018 Market Saturation – Source Lighting
Source Lighting based in Tennessee and led by Jonathan McKinley entered 2018 with a laser like focus determined to grow distribution in a diverse customer channel in 2018. Only 12 months later, Jonathan accomplished that goal by almost doubling the territory. Respected by his peers and well-liked by his customers, Source Lighting has cemented themselves as a key agency in the Bulbrite family.

2018 Agency of the Year – Décor Lighting
Hired in 2012 to represent Bulbrite in Minnesota and Wisconsin, this elite team of representatives led by Todd Bierowski now covers 8 states for Bulbrite and are seemingly always in the running for the prestigious Rep of the Year Award. The last time they had won this award was 2011, but now on the heels of a great 2018, Todd Bierowski, Kathy Skogen, Troy Kaup and Nick Curtis are looking to take that next leap and be back to back winners.

Founded in 1971, BULBRITE is a leading manufacturer and supplier of innovative, energy-efficient light source solutions renowned for its commitment to innovation, education and service. Bulbrite’s award winning, high quality product portfolio ranges from designer bulbs such as the Nostalgic Collection of bulbs and fixtures to the latest in performance LED retrofit bulbs. Bulbrite also powers a comprehensive online educational resource, LIGHTOPEDIA.com, where both lighting professionals and consumers can learn everything about lighting and legislation. BULBRITE is a proud supporting Committee Member of the American Lighting Association, an active member of Zhaga, a Silver Sustaining member of the Illuminating Engineering Society of North America (IESNA), an Energy Star Partner, a Lighting Facts LED Product Partner, a member of the LUMEN coalition and a member of the International Dark Sky Association.